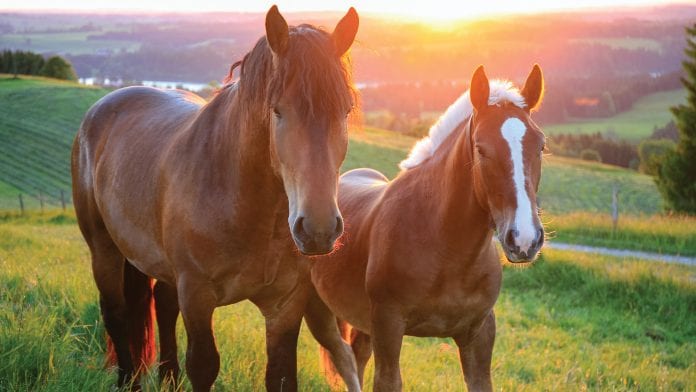 The development of new and better vaccines holds enormous promise in efforts to tackle a range of animal diseases, from post-weaning diarrhoea to deadly foal pneumonia.

Rinderpest became the world’s first – and, to date, only – animal disease to be eradicated in 2011, in no small part thanks to a dedicated mass vaccination campaign. Indeed, vaccines have proven themselves to be one of the most significant contributors to global animal and human health since their invention and, in an era of rising antimicrobial resistance, continue to play a major role in safeguarding domestic and farm animals against disease.

Here, Health Europa presents recent research into the development of new and improved protective vaccines for some of the most challenging animal diseases today.

Scientists at VTT Technical Research Centre of Finland have developed a vaccine that, when diluted into drinking water, can be used as a diarrhoea treatment for piglets being weaned. The intervention could help to replace antimicrobial use in pig production and contribute to millions in annual savings.

Post-weaning diarrhoea is caused when piglets move from liquids to solids, robbing them of the protection provided by the sow’s milk and allowing harmful bacteria, namely E. coli, to attach to the intestine. This causes the piglet to suffer and its growth to slow. In extreme cases, it can even lead to death.

Diarrhoea in piglets is currently prevented by means of diet, hygienic rearing conditions, and antimicrobials such as zinc oxide. However, the livestock sector is under growing pressure to reduce its use of antimicrobials due to fears over rising antimicrobial resistance. In the US, it has been estimated that more than 70% of medically important antibiotics are used for animal diseases.

The new vaccine is administered to piglets in drinking water after weaning. The immune system recognises the vaccine molecule and starts creating antibodies to stop the bacteria from attaching to the receptors in the small intestine, thus preventing diarrhoea. Were the vaccine injected, principal VTT scientist Jussi Joensuu explains, “most of the antibodies would remain in the bloodstream”.

The first animal test of the vaccine has already demonstrated promising results in terms of efficacy, but further trials will be needed before it can be developed into a commercial product. Joensuu is nonetheless hopeful that the vaccine will become available on the market in the next few years – great news for piglets and farmers alike.

Elsewhere, scientists at the University of Edinburgh and the Pirbright Institute, UK, have developed a new vaccine strategy that could protect millions of chickens against a highly contagious and serious respiratory disease. Their research is published in the Journal of Virology.

Infectious bronchitis virus (IBV) affects the respiratory tract, gut, kidney and reproductive systems. In addition to leaving chickens vulnerable to other animal diseases, it can cause them to lose weight, as well as reducing egg production and impairing egg quality. IBV also accounts for substantial economic losses to the global poultry industry.

Current vaccines afford a limited measure of protection against the virus, but research is urgently needed to develop new vaccines that protect against multiple strains.

Edinburgh and Pirbright scientists have thus tested a novel approach using a special type of vaccine called a recombinant virus vaccine, which works by introducing microbes into the cells in the body using a harmless or weak version of a virus or bacteria.

The team used recombinant viruses with different spike proteins as vaccines to build two versions of a harmless virus. Spike proteins allow the virus to attach to and enter cells. Scientists believe that differences in these proteins between strains of IBV could explain why current vaccines are ineffective against certain strains.

As a next step, the scientists are therefore looking to develop a harmless vaccine that induces a stronger immune response, meaning it may be a while yet before this vaccine is suitable for use on the farm.

In the US, Morris Animal Foundation-funded research has led to a potential breakthrough in the battle against Rhodococcus equi infection, which kills an estimated 20-40% of infected foals.

R. equi causes severe pneumonia and can also affect the bones (including the spine), abdominal lymph nodes, eyes, joints and brain. Effective antibiotic therapies exist for the disease, but there are currently no licensed vaccines.

Now, however, scientists at Texas A&M University and Harvard Medical School have developed a novel vaccine strategy against the deadly pneumonia.

They began by investigating whether vaccinating pregnant mares at three and six weeks before they gave birth would provide their offspring with sufficient protection. The team discovered antibodies that ward off pneumonia were transferred to the foals via the mares’ colostrum and, more importantly, those antibodies were able to prevent almost all the newborns from contracting pneumonia.

Next, they carried out a small, randomised, controlled study of nine foals with R. equi. Five of the foals received a serum with high levels of antibodies against the infection, and four were given standard plasma. The latter group all went on to develop pneumonia, while the former remained free of infection.

Further safety testing is ongoing, but these initial results – published in the journal PLOS Pathogens – suggest that this new vaccine strategy is a safe and effective method of protecting foals against R. equi pneumonia. The scientists also suggest that immunising donor horses with this vaccine could be used to produce plasma with which foals could be transfused to prevent the disease.

Dr Noah Cohen, Patsy Link chair in equine research at Texas A&M University and one of the senior authors of the paper, adds that the vaccine also has the potential to protect against diseases like sepsis, the leading cause of death for foals in the first few weeks of life, and strangles, a common and highly contagious upper respiratory tract infection.

Morris Animal Foundation-Funded research has also discovered an effective way of treating dogs with canine leishmaniasis, an often fatal disease that leads to weight loss, sores and ulcers, and organ failure, among other symptoms.

Canine leishmaniasis is caused by the parasite Leishmania infantum and is most commonly transmitted by sand fly bites in tropical countries. It is enzootic in over 70 countries and has recently emerged in the US, as well. Dr Christine Petersen, an associate professor of epidemiology at the University of Iowa, US, believes the disease also impacts roughly 20% of dogs in Southern Europe.

In a major milestone for canine health, Iowa scientists have shown that the vaccine LeishTec™, which is already available and frequently prescribed in Brazil to protect dogs against canine leishmaniasis, can also be used to treat currently infected dogs.

“Too many dogs die every year because of this terrible disease, and we’ve figured out all the things that could go wrong with the body during disease. I wanted to start coming up with tools to make things go right,” Petersen explains.

“Usually vaccines prevent infections, but some, like the rabies post-exposure prophylactic vaccine, can be used after infection. We were happy to prove this was the case with LeishTec.”

The scientists tested the vaccine on more than 400 dogs (most of them foxhounds) in eight states. The dogs were vaccinated three times in six weeks and then checked every three months over the next year. The team found that not only is it safe to give the vaccine to already infected dogs, but that doing so also minimises disease.

“This is an important study that is going to make a big difference in canine health globally,” says Morris Animal Foundation’s interim vice-president of scientific programs, Dr Kelly Diehl.

“We now have a new tool in the toolbox to control this disease and give countless dogs longer, healthier lives.”

This research has been published in the journal Vaccine.

Recommended Related Articles
Animal health for the benefit of all
An effective new treatment for cerebral malaria in mice found
60% human diseases originate in animals: Could One Health tackle this?
Gene-edited pigs resistant to porcine reproductive & respiratory syndrome

Are antidepressants for chronic pain effective?

An existing drug could provide a potent treatment for acute leukaemia