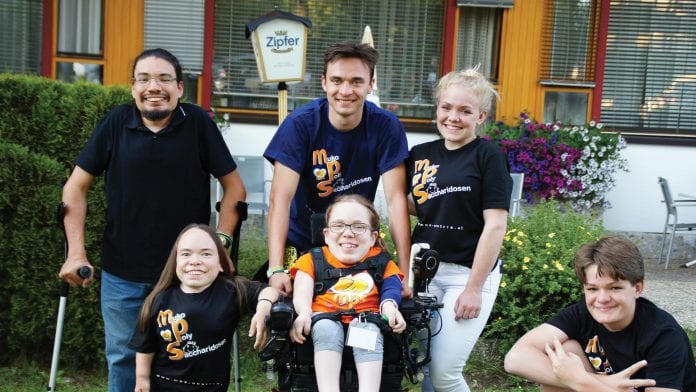 Susanne Gerit Kircher, of the Medical University of Vienna, explains why more resources and effort must be put into understanding mucopolysaccharide storage diseases in adults.

Mucopolysaccharide storage diseases (MPS) are a group of rare inborn metabolic diseases. There are at least 11 different types, all belonging to the so-called ‘lysosomal disorders’, diseases which are caused by impaired function of the small cell-organelles, the lysosomes. Lysosomes are vital cellular components and any damage or impaired function has far-reaching, even fatal consequences for the cell metabolism and survival. It is therefore not surprising that any inherited lysosomal disorders have severe consequences, even during the fetal period or in the first months of life.

With this knowledge, it could be understood that the first publications about mucopolysaccharide storage diseases described severely affected children in their first years of life, with many symptoms of the disease in the skeleton, the abdominal organs and the faces. This was 100 years ago, the first authors were the paediatricians Charles Hunter (from Canada), Meinrad v. Pfaundler (Austria), and Gertrude Hurler (Germany). While Hunter focused on the many signs such as peculiar face (‘gargoyle’-like), umbilical and inguinal hernias, protruded abdominal wall, Pfaundler and Hurler described the many changes in the skeletons of their patients which they could show by X-rays. The two different MPS types (this was shown more than 50 years later) later received the names Hurler’s and Hunter’s diseases. All these affected children did not survive long.

Unexpected observations in the severity of MPS

In 1962, the ophthalmologist Harold Glendon Scheie (USA) believed in a new disease he named as ‘forme-fruste’ of Hurler’s disease. He observed very similar changes in the cornea and the conjunctiva of the eyes in adult patients as he had known from the young Hurler patients. All the other not so typical signs for mucopolysaccharide storage diseases he could not recognise. In those days, four different clinical types of MPS were already known:

It was therefore obvious to denote the type described by Scheie as MPS type V (Scheie’s disease).

It took a few more years before, in 1969, Elizabeth Neufeld and her coworkers Joseph Fratantoni and Clara Hall (all USA) discovered specific factors which were able to correct signs of storage in MPS fibroblast cultures. When investigating these corrective factors systematically, they could prove the different origin of Hurler’s and Hunter’s disease. When identifying these factors as lysosomal enzymes, it was surprising that the severe MPS form Hurler had the same enzyme defect as that in Scheie patients. The term MPS type V was no longer used. But, as adult patients existed, the dilemma was solved by creating the new terms MPS I – Hurler and MPS I – Scheie, and, if the severity was between, MPS I – Hurler-Scheie compound. This was the beginning of the finding that adult MPS patients existed.

MPS – no longer a disease only in childhood

Sensitisation and knowledge about mucopolysaccharide storage diseases were raising awareness to improve the diagnoses of these patients. Nevertheless, it took years before these affected patients were diagnosed as suffering from MPS. Unquestionably, diagnoses improved for young patients; the focus was on the early signs and better screening methods. These efforts were reinforced due to the possibilities of effective therapies which should start or be performed as early as possible. The aim of discovering the youngest possible patients to make the correct diagnoses and start with the best available therapy led to the fact that only small efforts were being made to find older patients.

But nowadays, due to better diagnostic procedures, more and more patients are being diagnosed in the later decades of their life. Some of them are parents, have children, have been educated and practise a profession. All of them have had symptoms since their young age, but nobody put two and two together and recognised an MPS disorder. The clinical symptoms were milder than expected, but still there. Many of them have had orthopaedic problems for many years and operations with prostheses of hips and knees. They have problems with the heart valves and some of them have had surgery with heart valve replacement. They have eye problems, such as glaucoma, cataract and corneal clouding, and are treated by ophthalmologists, even operated on. They have joint problems, restricted movements and severe pains, and rheumatologists cannot provide evidence of rheumatism. Some of them suffer from psychiatric problems and intellectual decline, such as MPS type III patients.

The new therapies used in mucopolysaccharide storage diseases, such as haematopoietic stem cell transplantation and enzyme replacement therapies, lead to a higher life expectancy of even severely affected patients. These treatments offer the specific missing enzyme to those who cannot make it themselves. These new forms of therapies cannot change the genetic cause but offer the missing gene product, with the consequence of decreased storage and stopping, even regression of the disease-related symptoms. It simply means that the genetically determined serious disease is transformed by those treatments into attenuated milder forms. Even patients who would have died some decades ago due to their disease may survive now for years or even decades. However, this positive development means that the medical treatment and care must adjust to the fact that more and more MPS patients are growing up.

Medical care and treatment in adulthood

Multisystemic diseases such as mucopolysaccharide storage diseases need a special approach. While paediatric medicine is composed of multidisciplinary disciplines, such as endocrinology, cardiology, pulmonology, gastroenterology, inborn metabolic diseases, and many other organ-specific educated staff, medicine in adulthood means that a bundle of different disciplines are offered to treat the specific problem. For MPS patients growing up into adulthood, this new situation now requires a group of medical doctors and caregivers that need to be addressed. Each of them is responsible for only a small part of the problems the patients have experienced. Instead of just having to contact one doctor, several specialists must be consulted. Accompanying symptoms in other organs are not perceived.

The physically (and possibly psychologically) affected persons may be overburdened with maintaining all these necessary contacts. The result is that patients cannot perform all those steps and that treatments are partially omitted. With negative consequences, the prolonged life may not have the best possible quality of life. The advocated reconciliation into adult medicine may facilitate the transition process but the situation in the increasingly old age is still unresolved. This can be seen, for instance, in the fields of genetic counselling, gynaecology and andrology, anaesthecis, orthopaedics, dermatology etc. All these specialists were not educated to nor ever expected to treat MPS patients with their special needs and requirements.

Medicine has to reconsider and deal with adults with mucopolysaccharide storage diseases. MPS is a chronic disease and challenging, but solvable. The experiences and observations of previous adults should encourage us to better deal with the new unfamiliar situation. It makes no sense to put all possible efforts into young patients and to leave them to an uncertain and unaccompanied future.

This article will appear in issue 8 of Health Europa Quarterly, which will be published in February 2019.