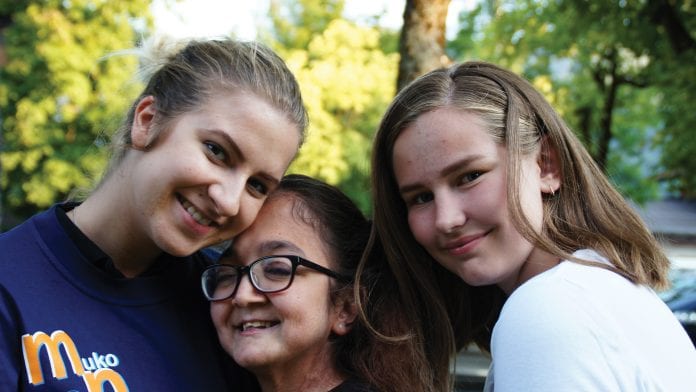 The Medical University of Vienna’s Susanne Gerit Kircher reflects on the medical progress that has allowed people affected by mucopolysaccharide storage diseases to start thinking about their futures – and the long road still to travel.

Mucopolysaccharide storage diseases are a group of rare inborn metabolic diseases. MPS is an abbreviation for ‘muco-poly-saccharides’, which is a thick, jelly-like consistency of mucus consisting of many (‘poly’) sugars (‘saccharide’). The chemical name for them is acid glycosaminoglycans or GAGs, which immediately implies that amino groups and acid sulfate groups are attached to the sugar chains. Usually we find these chemical substances in the connective tissue, where they are responsible for different properties of tissues and organs. It is easy to understand that bones, cartilage, tendons, joint surfaces, heart valves and corneas require different properties and therefore have different compositions.

However, in all instances the basic principle holds true that the tissue-specific cells are embedded in the so-called ‘extracellular matrix’, which is made of GAGs (or MPS) in varying compositions. Another important function of GAGs is on the surface of each cell forming a coat made of brush-like macromolecules, the so-called ‘glycokalix’. In this case, GAG chains combined with proteins or lipids form little structures responsible for the interaction with the extracellular space or other neighboring cells. As GAGs (or MPS) are present in all parts of the body, it is obvious that any disturbance in their metabolism has severe and widespread consequences. MPS disorders may involve many different tissues and organs, which is why they are also known as multisystemic diseases.

The long way to an adequate therapy

Mucopolysaccharide storage diseases were first described in 1917 and 1918. At this time, patients were described as having multiple bone changes (‘dysostosis multiplex’) and there was no therapy to handle or change it. Because of the mental delay in others, it was thought that they suffer from hypothyroidism and iodide was given to them, without effect. The knowledge that this disease has its origin in the connective tissue led to unsuccessful treatment attempts with ascorbic acid and corticoids.

When recognising the enzyme deficiency in the 60s of the last century, many efforts were put in trials to substitute the missing enzyme the patients suffer from. Many sources of enzymes were used to increase the enzyme activity in affected people, such as fibroblast cultures from cells of healthy persons implanted under the skin and foetal membranes implanted on several parts of the body, including under the conjunctiva of the eyes to improve corneal clouding. Repeated blood transfusion and plasma infusions could show some temporary effect and prove that enzyme substitution would be most effective to help the patients with MPS.

35 years ago, the great era of bone marrow transplants began, but many patients died during this procedure and not all profited from this therapy; the disease progressed. Therefore, many of the patients died in the first or second decade of life. In this aspect, not many efforts have been made to treat the multiple symptoms patients showed, such as orthopaedic, cardiac or neurologic symptoms.

The methods and successful transplants of bone marrow and nowadays of haematopoietic stem cells (HSCT) improved enormously and give patients significantly better chances to survive this procedure. An early treatment with this form of therapy prevents an unlimited disease progression and increases enormously the life expectancy and quality of life.

From 2006 on, more and more enzyme replacement therapies (ERTs) for different types of mucopolysaccharide storage diseases became available. Now they are available for MPS types I (Hurler and Scheie), II (Hunter), IVA (Morquio A), VI (Maroteaux-Lamy) and MPS VII (Sly). The weekly intravenous infusions are of low risk for the affected person and they affect the disease process very positively; the progress of the disease slows down and most of the clinical symptoms regress or disappear (Figs. 1, 2). Thanks to these new treatments, patients survive into adulthood and gain new life perspectives. These not only affect physical needs but also social aspects, school, education, profession and partnership.

Thanks to early starting causal treatment with ERT or HSCT, patients have much milder forms of mucopolysaccharide storage diseases than they ever had before. Hand in hand, many efforts are being made to diminish clinical symptoms with all forms of symptomatic therapies, such as orthopaedic or heart operations, operations on the cranio-cervical junction in order to prevent paralysis, treatment of carpal tunnel syndrome and hernias, corneal transplantation, orthoses, hearing aids etc.

The list of things to support the special needs of these patients is getting longer and longer, as many efforts are being made to enable improved mobility and an autonomous life. Patients develop into individuals with special mental and emotional needs, well educated, with the will to work, living in partnerships and planning families.

This is really new and, for decades, it was unthinkable. Medical care and treatment are no longer only under the remit of paediatricians, but, now, all the necessary specialists for adults with MPS are needed, a transition which is in progress but not yet solved in many countries of Europe. The patient’s chances could be even better with established multidisciplinary care and treatment on a low threshold level. New research is also starting on all newly arising and observed symptoms patients offer when they grow up, for instance severe skeletal, cardiac, tracheal or neurological symptoms.

Importance of preparing the patients for the future

For a very long time, nobody spoke about a future for patients with mucopolysaccharide storage diseases, but, now, most of the patients will experience their future. It is our responsibility to prepare them for that, with well-planned transition processes into adult medicine, with the strengthening of their self-responsibility, with the revelation of their strengths, weaknesses and perspectives, and the encouragement to accept and plan their own life. This is a difficult task for all involved people but a completely new chance for all.

Susanne Gerit Kircher is the co-founder and honorary member of the Austrian and German MPS societies. She published the book Mucopolysaccharidoses – A Guide for Physicians and Parents in several languages and editions. In 2016 she was awarded with the ‘Life for MPS’ – International Scientific Award of the International MPS Working Party.