In a letter to the heads of the US Food & Drug Administration (FDA), the Centers for Disease Control and Prevention, and the US Department of Health and Human Services, the Americans for Safe Access (ASA) has called for the safe regulation of vapourisation products and cartridges, some of which are used by patients as a medical cannabis device. The National Cannabis Industry have also called for better regulation of illicit products.

As part of its recommendations, ASA urges the FDA to use its regulatory authority to, at minimum, issue guidance that encourages consumers to only buy vapourisation products in legal, licensed stores and not on the illicit market.

“For many medical cannabis patients, vapourisation is a popular delivery method. Patients have a right to know what is in their medicine, and the FDA should recognise that the only way to prevent further health complications from vaping products is to allow a lawful, regulated marketplace for them to exist.”

ASA recommends that the FDA:

To date, there have been 380 confirmed cases of lung illness and six confirmed deaths attributed to vaping products. Advocates cite prohibition as main driver of illicit market products linked to most cases and are urging federal action and caution from producers of state-legal cannabis vape products.

However, there has been no consistent e-cigarette or vaping product, substance, or additive that has been identified in all cases, nor has any one product or substance been conclusively linked to lung disease in consumers.

The letter states: ‘While a single cause for these illnesses has not been identified, vitamin E oil (tocopheryl-acetate) has been implicated in a number of cases, with this oil frequently appearing in tested samples of illicit cartridges that also contain THC (tetrahydrocannabinol).

‘As many of our members utilise vaping as the mechanism to deliver their medicine, they share a fear that the FDA will outright ban vape cartridges and vaping or impose restrictions so onerous as to seriously disrupt their treatment regimen. Medical cannabis patients often prefer vaporisation because dosing and administration is often easier with vaping than with other delivery methods.’

‘Americans for Safe Access welcome the opportunity to discuss compliance with the FDA.’

The National Cannabis Industry has also called for action in light of the crisis and note that other possible causes of vapourisation related illness including pre-existing medical conditions, faulty delivery devices, or problematic consumption behaviour are being explored.

In light of the indeterminate cause(s) of these illnesses and variance in state regulations regarding vape cartridges, the National Cannabis Industry Association (NCIA) makes the following recommendations:

“The fact that so few of these cases have so far reported any link whatsoever to the legal cannabis market is a testament to the effectiveness of state regulators and licensed businesses at ensuring product reliability.

“As an industry, however, we view it as our duty to make sure whatever is causing these illnesses is not replicated in legal products and to work toward enacting regulations that can prevent similar public health issues from occurring in the future.

“The legal cannabis industry is paying very close attention to any new information provided by medical authorities regarding these cases.

“It is now the responsibility of Congress to end prohibition and regulate cannabis without delay. By removing cannabis from the schedule of controlled substances and instituting a clear regulatory framework through existing agencies, the federal government can provide helpful guidance to states that have or wish to establish regulated cannabis control systems while helping put irresponsible illicit market producers out of business for good.

“We are deeply saddened by this situation and sincerely hope the specific causes are determined as soon as possible to help avoid further suffering. We stand ready to work with Congress and federal regulators on the long-term solution to this problem, which is replacing prohibition with sound regulations.” 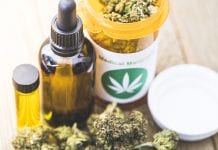