Using AI-driven software (Creation Pinpoint®), the study analysed 313,668 English-language unique mentions of pancreatic cancer on Twitter between January 2018 and December 2019, categorising each into one of five topic areas:

The researchers then further divided these into those generated by healthcare professionals (27,031) and those by the general public (307,449).

Despite the high rates of use among patients and the wider public, the research suggests healthcare professionals active in pancreatic cancer have yet to fully embrace the potential of social media to raise public awareness of key campaign objectives during periods of heightened interest.

As part of the analysis, the report investigated the impact of notable events in the online pancreatic cancer conversation, such as the pancreatic cancer-related deaths and diagnoses of high-profile public figures and Pancreatic Cancer Awareness Month.

The study found that despite the heightened activity and interest among the general public during these periods, healthcare professionals were not initiating conversations online in key areas, such as risk factors, including a family history of pancreatic cancer.

Pancreatic Cancer Awareness Month, it found, was not driving online engagement among healthcare professionals across any of the five key topic areas.

In contrast, online engagement among the general public was heightened during Pancreatic Cancer Awareness Month. However, this was only temporary and limited to just three of the five areas: treatment, research, and survivorship, not prevention or policy.

The study found that, typically, these announcements would not affect conversations initiated by healthcare professionals but had a varied impact on conversations among the general public.

However, the announcement of American singer-songwriter Aretha Franklin’s death in August 2018 did not result in changes in any of the five domains studied as a part of the analysis. 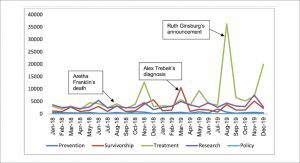 The study found that, overall, the Twitter discussions of healthcare professionals were not aligned with discussions initiated by the public.

Doctors most often discussed pancreatic cancer research (10,640/27,031 mentions, 39.4%) while the public most often discussed treatment (154,484/307,449 mentions, 50.2%). Policy drove the least engagement across both groups: 0.1% of total mentions among healthcare professionals and 3.3% among the public. The findings also showed healthcare professionals were more likely to initiate conversations related to research and prevention, whereas the public took the lead in the domains of treatment and survivorship.

Lead author of the report and Associate Director of Insight at Creation Healthcare, Jamie Doggett, said: “The study’s findings are positive and significant. They indicate a high level of social media engagement in the pancreatic cancer conversation on Twitter among clinicians, patients, and the public. Healthcare professionals and advocacy groups can leverage this social media engagement to raise pancreatic cancer awareness and gain valuable feedback to create an ongoing loop. The findings of the research also offer insight into how healthcare professionals and advocacy groups can optimise their digital engagement to further meet their broader campaign objectives, such as raising awareness regarding prevention, screening and early diagnosis.

“More broadly, it showcases the growing role of social media in helping to build a real-time communicative and collaborative platform that allows healthcare providers to involve patients in their care by sharing the latest research and developments.

“Ongoing analysis is also required. The information generated can be leveraged by stakeholders to design interventions to address deficiencies and improve communication in those specific areas in a focused manner. This knowledge will also add to the efficiency of targeted interventions such as tailored messaging, which may be used by healthcare organisations and advocacy groups to further augment dialogue around pancreatic cancer.”

Fellow author of the study, Allyson J. Ocean, M.D. Chair, Scientific Advisory Board and Co-Founder of Let’s Win! Pancreatic Cancer, commented: “The findings of this study offer valuable insights for all stakeholder groups involved in the fight against pancreatic cancer, not least healthcare professionals. For one, they suggest healthcare professionals can harness Twitter to disseminate information to and receive feedback from a substantial community of patients and other relevant stakeholders.

“But, the data suggests there’s also more value to be gained from this online engagement platform. This is demonstrated by the lack of social media engagement among the medical community surrounding the deaths and diagnoses of high-profile public figures, such as Alex Trebek and Ruth Bader Ginsburg.

“We know from past experience that public figure cancer diagnoses have influenced public behaviour related to cancer. President Ronald Reagan’s diagnosis of colon cancer, for example, resulted in an increase in the number of colonoscopies performed on asymptomatic individuals.

“The medical community, particularly those involved in the treatment of and research into pancreatic cancer, must do more to seize these opportunities to advance the healthcare communities priorities, such as awareness of symptoms and risk factors.”