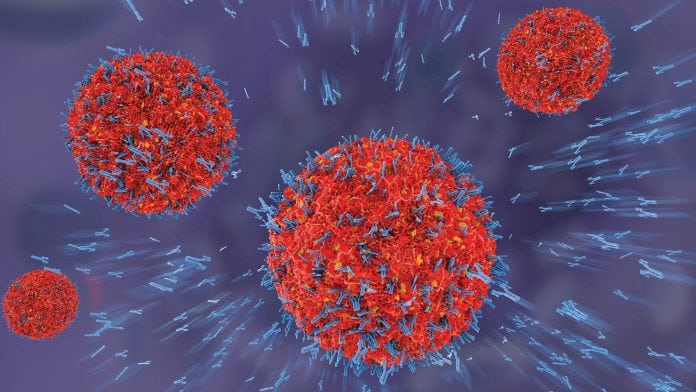 The Departments of Surgery and Molecular Cell Biology & Immunology, VU University Medical Center, Amsterdam, explore how immunotherapy can be used to fight against cancerous cells in the blood circulation.

Traditionally, cancer has been treated with a combination of surgery, radiotherapy and chemotherapy. This is effective up to a point, but maximum dose limits and resistance hamper the cure of many patients, hence why new ways of treating cancer are urgently needed. One of the most sought-after, novel approaches focusses on harnessing the patients’ immune system to fight tumours. This is referred to as immunotherapy. Our immune system is extremely capable of fighting anything that is foreign, such as viruses, bacteria and parasites.

Cancer cells are, however, derived from the self, i.e. they have arisen from normal cells, and due to genetic changes these cells have been enabled to proliferate uncontrollably. The immune system is not very successful in attacking cancer, as immune cells have been taught to ignore normal cells. Some mutations, however, lead to “foreign-looking” cancer cells, which can, theoretically, be eliminated by the immune system. Nonetheless, in many instances cancer cells can evade the attack because they have developed the means to inactivate immune cells. Thanks to immunotherapy, we can try to re-educate the immune system.

How can we enlist the immune system to fight cancer?

The immune system is a generic term which encompasses a plethora of different types of immune cells and factors that collectively protect us from infection. Accordingly, immunotherapy is a set of multiple different approaches that aim to recruit one or more immune cell types as killer cells. The most important immune cells to eliminate ‘foreign-looking’ cancer cells are referred to as cytotoxic T lymphocytes. These immune cells can be isolated from cancer patients, expanded outside the body and re-infused, hereby generating an army of killer cells. Unfortunately, this strategy will not work once the cancer has acquired the ability to shut down the cytotoxic T cells.

In such cases, methods can be employed to re-activate cytotoxic T cells by treating patients with drugs – the checkpoint inhibitors – that activate the “on” switch. Another important immunotherapeutic approach is directed against tumour cells by injecting antibodies that recognise special molecules on the cancer cells. In this way, the antibody acts as a flag that enables another type of immune cells – the macrophage or “big eater” – to recognise and eat the tumour cell.

Even though very promising results have been achieved in the last years, immunotherapy does not work in all patients. There are several reasons, but not all cancers were created equally. Some, like melanoma and lung cancer, have many genetic alterations that change their appearance, and releasing the brakes of cytotoxic T lymphocytes via checkpoint inhibitors can enable them to kill ‘foreign-looking’ cancer cells. But, sometimes, patients do not have sufficient cytotoxic T cells, or they are in the wrong location. In other cases, the off switch is not the main problem, as cancer cells have devised multiple ways to counteract the assault on the immune system.

For instance, they can release signalling molecules that instruct immune cells to stand down. Thus, selecting the right patient for the right type of immunotherapy is very important, but at this moment, sufficient knowledge is lacking in order to predict who may benefit from a certain kind of treatment and who won’t.

Changing the timing of immunotherapy

Antibody therapy is also not suitable for the treatment of all cancer patients. Flagging cancer cells with antibodies promotes eating – or phagocytosis – by macrophages, but this works best with leukemia (cancers of the blood) and not with solid tumours. The best initial therapy for solid tumours is surgical removal, especially when the cancer has not metastasised to other organs. Once the tumour has spread, it becomes more difficult to treat. In the case of colorectal cancer, we, however, previously demonstrated in an experimental model that surgery creates a niche in the liver that allows cancer cells in the bloodstream to adhere and grow out. Thus, paradoxically, surgery of colorectal cancer may enhance the risk of liver metastases.1

This presents a major problem as:

Once a patient develops metastases, retreatment is necessary, which may involve surgical resection of liver metastases and chemotherapy. Additionally, antibody therapy is conducted. The latter is, however, not very successful, possibly because macrophages in the metastasis receive stop signals. Antibody therapy is, therefore, not very effective in stimulating macrophages to eat flagged cancer cells in existing colorectal metastases.

Importantly, the liver is populated by numerous macrophages that filter the blood. And since antibody therapy is very suitable to eliminate leukemic cells, it may also be possible to entice macrophages to eat circulating colorectal cells that are present in the bloodstream. In experimental models, pre-surgical antibody therapy indeed promoted phagocytosis of circulating cancer cells by macrophages, which prevented the outgrowth of metastases.3 Thus, rather than employing immunotherapy to treat solid tumours and metastases, the potent ability of macrophages to eat flagged, single-target cells could also be utilised to remove minimal, residual disease in patients. On the one hand, surgery can remove the bulk of the tumour, whilst on the other hand adjuvant antibody therapy may serve to eliminate remaining cancer cells in the circulation.

Because circulating cancer cells are found in many malignancies, including lung cancer, breast cancer, head and neck cancer, pancreatic cancer, and renal cell carcinoma, and their presence correlates with poor prognosis, pre-surgical immunotherapy may increase the outcome of many patients.

The Cancer Center Amsterdam (CCA), the Netherlands, is one of the largest oncology research centres in the Netherlands, housing cancer researchers from the Amsterdam University Medical Centra which comprises the VU University Medical Center and the Academic Medical Center. The main mission of the CCA is to improve treatment, life expectancy and quality of life for patients with cancer. Fundamental and translational research is connected with clinical studies in an integrated, multidisciplinary approach to promote the translation of experimental results into clinical practice. Research in the CCA is incorporated in the three main research themes:

The research of Professor van Egmond is embedded in the theme of cancer biology and immunology. In close collaboration with the surgery departments of several hospitals in the Amsterdam region, she recently started the first multicentre clinical trials to study whether pre-surgical antibody therapy can eliminate circulating cancer cells of patients undergoing surgery. Ultimately, the goal is to prevent the development of metastases.

This is a commercial article that will appear in Health Europa Quarterly issue 6, which will be published in August, 2018.