NervGen is developing a novel drug candidate that could revolutionise treatment for conditions associated with central nervous system damage, including Alzheimer’s disease.

It promises to be a world’s first – a drug candidate that appears to be able to unlock the central nervous system’s (CNS) natural ability to repair itself.

In stark contrast, existing drugs can only limit or contain the extent of the CNS damage that is the root cause of the world’s hardest to treat neurodegenerative diseases. For instance, existing drug therapies that target Alzheimer’s disease – the most pervasive of them all – have only succeeded in marginally decelerating its progression. This offers little comfort to the afflicted or to their loved ones.

NVG-291 is a novel drug candidate that could be the biggest breakthrough in decades, according to several leading experts in Alzheimer’s disease. Medical science will likely find out whether NVG-291 is indeed a prospective wonder drug as early as next year. This is when Phase 2 clinical trials should be well underway.

Indeed, this promising compound is already garnering news headlines. Yet it is not Big Pharma that is taking credit for NVG-291’s success in pre-clinical investigative research. Instead, a small North American life sciences start-up called NervGen Pharma is its unlikely developer.

The company acquired the licensing rights to NVG-291 from its inventor several years ago with the mission of developing an entirely new class of truly disruptive drugs – ones that treat a wide spectrum of neurodegenerative diseases of the CNS.

Prior to NervGen’s involvement, this novel experimental compound was mostly known in medical research circles for producing dramatic improvements in animals with spinal cord injury (SCI) – another affliction that involves serious damage to the CNS.

NervGen’s management saw an extraordinary opportunity to apply NVG-291’s efficacy in stimulating neuron growth in the CNS to the treatment of Alzheimer’s disease.

It has proved to be a good gamble so far. With decades of scientific research underpinning NVG-291’s therapeutic mode of action, NVG-291 has been shown to literally rewire the brain or spinal cord in several animal models – allowing for remarkable restoration of physical functionality, as well as measurable cognitive improvement.

Such tantalising outcomes paved the way for NervGen’s financing of Phase 1 clinical trials, which got under way in 2021 to establish NVG-291’s safety profile in healthy humans.

Having experienced encouraging results in toxicity studies in animals (even in very high doses), the company is expecting comparable outcomes in human trials, due to be completed in the next few months. Phase 1 results should help to determine the optimal, safe dosages of NVG-291 which will be administered as a single injection to Phase 2 trial subjects every day for three months.

These pivotal Phase 2 clinical trials are set to get underway for Alzheimer’s disease, as well as for spinal cord injury in a separate study, commencing in Q4 of this year.

According to one leading Alzheimer’s expert, Dr George Perry, NVG-291 is equally suitable for these two very different ailments because of its profoundly restorative effect on the CNS, involving the ability to stimulate both neuron regeneration and functional neural plasticity, too. (More on this later.)

A member of NervGen’s clinical advisory board, Dr George Perry is the current and founding Editor-in-Chief of the Journal of Alzheimer’s Disease and Semmes Distinguished University Chair in Neurobiology at the University of Texas, San Antonio. He has been studying innovations in this field since 1982 and has received a number of awards for his seminal research.

He states: ‘It is a new paradigm shift for treating Alzheimer’s disease. Nobody else in medical research is taking this same approach. It is essentially enabling the brain to repair itself.’

Also, this is one of the few new ideas in Alzheimer’s research that actually has an incredible amount of biological foundation behind it. So, it is a very exciting approach that has some of the best scientific evidence in its favour… What NervGen is doing is taking a very holistic approach to the complexity of treating nerve damage in the brain.’

A Eureka moment – three decades in the making

NVG-291 is the result of several decades of research conducted by a renowned neuro-researcher. Dr Jerry Silver is a professor at the Department of Neurosciences, School of Medicine, at Case Western Reserve University.

One of the world’s foremost neuroscience researchers of spinal cord injury, Dr Silver is the recipient of the Ameritec Prize for significant accomplishments toward a cure for paralysis, as well as the Christopher Reeve-Joan Irvine Research Medal (The Reeve-Irvine Medal) for his research into spinal cord injuries.

Dr Silver was the first to identify a class of molecules in the CNS called chondroitin sulfate proteoglycans (CSPGs). His brainchild came as a result of his discovery that CSPGs inhibit the CNS’ natural ability to repair itself. He also found them to be densely concentrated wherever there is damage to the CNS.

This includes the discovery that CSPGs are especially prevalent in the vicinity of amyloids (brain plaque), a key physiological indication of the insidious and inexorable progression of Alzheimer’s disease.

By unlocking the secret of how CSPGs inhibit repair, Dr Silver laid the groundwork for creating NVG-291. Not only has this drug candidate been shown to regenerate damaged neurons in animal studies, but it was also shown to create entirely new connections, which is known as ‘sprouting’.

This healing mechanism involves the ability of surviving neurons to literally reach out and make short-range reconnections of circuits in parts of the brain that have been damaged or have experienced degeneration. In so doing, the remaining neurons are able to amplify their functionality as much as ten-fold, according to Dr Silver.

The combined effect of sprouting and the regenerative process of NVG-291 on neurons together are the catalyst for functional plasticity – the self-healing process that Dr Silver expects to produce profoundly positive results when Phase 2 trials get underway.

He states: ‘If we can prove that we can get NVG-291 into the brain and spinal cord, then it is going to do some magical things. We have already seen that being achieved in our animal models. When we start injecting people, we are hoping to see them actually recover.’

All told, the findings show that NVG-291 can not only improve motor function and sensory function (the ability to walk, grasp, and feel objects), but also cognition (the ability to recall memories). Again, it bears reiterating that this is achieved by down-regulating (mitigating) the effect of the CPSGs.

A paradigm-changer for the ages

Dr Cummings serves as Director of the Chamber-Grundy Center for Transformative Neuroscience at the University of Nevada, Las Vegas. He has also been recognised for his research leadership in Alzheimer’s disease with the prestigious Lifetime Achievement Award from the Alzheimer’s Association and is a recipient of numerous other honours, including from the Society for Behavioural and Cognitive Neurology, American Association of Geriatric Psychiatry, International Society of CNS Drug Development, and the American Geriatrics Society.

He says Phase 2 trials for NervGen will be ‘where the rubber hits the road’, meaning that they should provide enough empirical and observational data to make or break this drug candidate, mindful that Phase 3 clinical trials are the ultimate determinant of whether a drug can ever be commercialised.

He states: ‘NVG-291 offers substantial promise… Phase 2 is the most exciting part of drug development because you get to see if your mechanistic hypothesis is going to be measurable in human beings. There will be several really important measures that will come out of this proof-of-concept study. These will be the clinical outcomes, critical safety outcomes, and biomarker outcomes.’

Blood-based biomarkers will be especially important, he adds, because they will offer empirical clinical evidence of changes in the patient in response to NVG-291.

Additionally, there will be a battery of tests conducted to determine if there is any change in the cognitive abilities and behavioural functionality of each patient in the Alzheimer’s trial.

‘If these Phase 2 results demonstrate safety, a positive biomarker effect, and a directional clinical effect, then I will be elated,’ Dr Cummings adds.

The stakes are especially high for NervGen. Indeed, these Phase 2 clinical trials will be keenly followed by the healthcare industry. Especially due to the fact that six million people in the US currently live with Alzheimer’s, and that number continues to increase each year.

In 2021, Alzheimer’s and other dementias cost the nation up to $355 billion, according to some estimates. The Alzheimer’s Association itself predicts those costs will rise to $1.1 trillion by 2050. 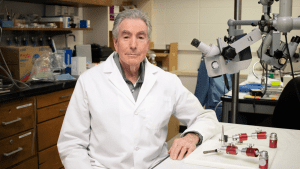 The key takeaway here is that NVG-291 offers new hope to tens of millions of sufferers of neurodegenerative diseases worldwide. This is what really excites NervGen’s management team and its advisors.

When asked about having to shoulder such extraordinary hopes and expectations, Dr Silver says he takes heart from his scientific findings and the considerable encouragement that they offer Phase 2 clinical trial subjects – involving those with Alzheimer’s disease and spinal cord injury.

He states: ‘I believe we can replicate what we have achieved in pre-clinical studies with laboratory rodents. Especially considering that human beings have surprisingly similar physiologies to these animals. If we are able to see similar recovery outcomes with humans, that would be remarkable. I am confident that our research shows we are on the right track.’

This article is from issue 22 of Health Europa Quarterly. Click here to get your free subscription today.