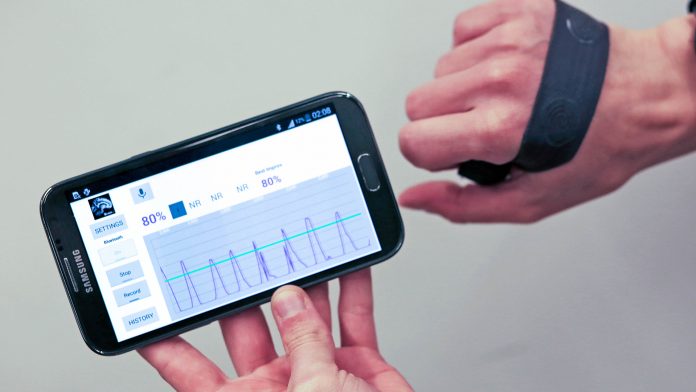 iHandUapp is developed by INESC TEC and consists of mobile and wearable technology that allows patients and their caregivers to monitor their Parkinson’s disease symptoms. The system includes a web platform that enables doctors to assess a patient in real-time, allowing them to prescribe new tests and change medication remotely.

Parkinson’s disease impacts around 10 million people globally, and occurs when nerve cells in a brain region called the basal ganglia are impaired or die. These cells produce the brain chemical dopamine and when suppressed, results in movement issues that characterise the disease.

Parkinson’s disease symptoms include tremors in the fingers and hands, speech difficulties, slow movement, loss of smell, poor balance and coordination, dizziness and stiffness. As these symptoms progress over time, monitoring and treating the disease is crucial to preserve the patients’ autonomy and quality of life.

How does the iHandUapp work?

INESC TEC began designing the technology in 2015. The wearable device contains embedded electronics that are integrated into a patented technology that measures a Parkinson’s disease symptom called wrist rigidity.

The device provides the patient with unprecedented insights into their condition, allowing them to visualise the disease’s progression. It also facilitates real-time data sharing with their doctors, including automatic quantitative evaluation of Parkinson’s disease symptoms, medication, or even disease-related events.

Duarte Dias, a researcher and coordinator of the Biomedical Engineering Research Centre at the Institute for Systems and Computer Engineering, Technology and Science (INESC TEC), said: “The system includes a hybrid mobile application for Android and iOS devices, through which patients can manage their medication and perform tests to monitor symptoms associated with the disease, at home or during medical appointments, while keeping the healthcare professionals informed about relevant events that may occur.

“Moreover, iHandUapp features a specialised dashboard so that healthcare professionals can monitor the medical history of patients and a cloud-hosted database that displays information in real-time.

“The first iHandUapp prototype is a promising proof-of-concept that will add value to the monitorisation of Parkinson’s disease symptoms. The app and its features have been analysed in collaboration with the Hospital Centro Hospitalar Universitário de São João (CHUSJ), taking into consideration the health professionals’ problems and needs. So far, the feedback has been very positive, which reinforces the usability, simplicity and suitability of our solution.”

The iHandUapp is also being employed during deep brain stimulation surgeries, a procedure that is used to inhibit motor symptoms when traditional medication is no longer effective. Choosing where to place the electrodes in a patient’s brain is a vital component of the therapy, and neurosurgeons predominantly use rigidity as feedback to optimise electrode placement. This process is usually performed using human perception, but iHandUapp provides quantitative data without human bias with an accuracy of 80%.